Development of the series has been led by Pacific Women, garnering learnings from many of its 182 partners over the nearly 10 year life of the program (2012 to 2021). The Practice Notes capture and share the lessons learned, successes and experiences from partners supported by Australia through Pacific Women. This knowledge will help to guide other gender equality initiatives and programming such as Australia’s new Pacific Women Lead program that commenced in 2021. 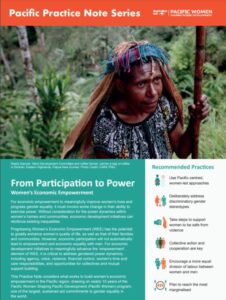 This Practice Note addresses the shortfall of many WEE initiatives to meaningfully address women’s empowerment.

The key learnings gathered and assessed in the Practice Note aim to help advance the conversation from ‘economic participation’ to meaningful ‘economic empowerment’ for initiatives in the Pacific. 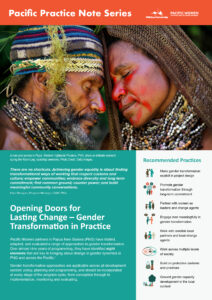 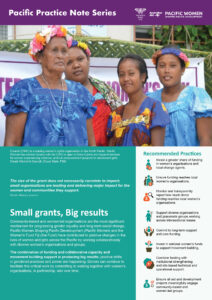 This Practice Note highlights the catalytic role of community-based and women’s organisations to women’s empowerment and social change, this Practice Note provides an evidence-base of successful small-granting approaches and strong partnerships, to influence funders to expand small granting programs. The evidence from the Women’s Fund Fiji and several Pacific Women partners indicates small grants can lead to significant results.

Pacific Women has reached an estimated 1.45 million Pacific women, men and children since 2012, through partnerships with Pacific organisations and gender equality advocates. From 2021, the Australian Government continues its commitment to gender equality through the new Pacific Women Lead program.

To capture and share the expanse of Pacific Women partners’ experiences, lessons learned and groundbreaking gender transformative approaches, a suite of knowledge products has been developed including the Pacific Practice Note Series. This knowledge will guide future gender equality initiatives including Pacific Women Lead.