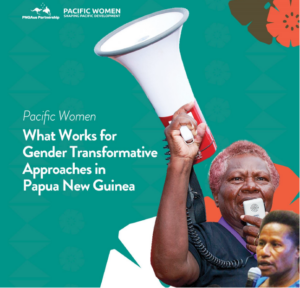 Positive gender transformative change is not only possible, it is happening in Papua New Guinea.

Pacific Women is one of the largest global commitments to gender equality. It aims to improve opportunities for the political, economic and social advancement of Pacific women.

It is supported by the Australian Government through the Papua New Guinea-Australia Partnership. Since it began in 2012, it has committed $116.84 million to initiatives that support women’s empowerment in Papua New Guinea and the Autonomous Region of Bougainville.

These approaches have been developed through Pacific Women’s partners’ efforts over the past eight years, since the program began in 2012. Such approaches seek to overcome the harmful norms and structures that reinforce gender inequalities in Papua New Guinea, underpinned by global experience. The brief highlights how gender transformation can be achieved by reinforcing changes at multiple levels, while ensuring a commitment to robust monitoring and shared learning.

This brief precedes a more detailed paper by Pacific Women examining gender equality transformative change, expected to be released before the end of 2020. The detailed paper will be a comprehensive analysis of approaches, case studies and practical application from and developed by Papua New Guinea partners through a series of review and validation workshops in 2019–2020.