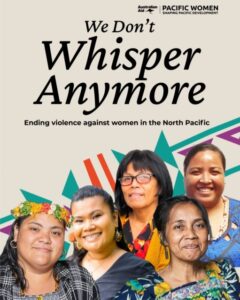 A new online photo book of Herstories and a ‘story of change’ booklet about ending gender-based violence (GBV) in the North Pacific has been released by Pacific Women in collaboration with its crisis centre partners.

The two gender-based violence (GBV) publications share the journeys of the Pacific women and women’s movements who − over more than 40 years − have struggled, lobbied, organised, stood in solidarity, supported each other and survivors of violence against women, and triumphed to open three countries’ first crisis centres in the North Pacific.

The set of two, new publications feature stories about the women behind the establishment and expansion of crisis centres, and celebrates the achievements of women helping women. Called ‘We Don’t Whisper Anymore – Ending violence against women in the North Pacific’ the set contains:

The series of nine Herstories offer a glimpse into the decades of struggle, solidarity and action that led to the creation of three crisis support centres for women experiencing violence in the North Pacific. Australia, through the Pacific Women program, is pleased to have supported three countries to have their first crisis centres: Women United Together Marshall Island and its Weto in Mour centre, Kiribati Women and Children Support Centre, and here in the Federated States of Micronesia, the Chuuk Women’s Council’s Tongen Inepwineu Counselling Center established in 2019. These centres continue to grow and expand, sourcing other funding and technical support as they increase support to women.

The visionary and tireless efforts of the women and organisations who brought these crisis centres to life − and who continue to lead the centres forward − are revealed in the stories. By sharing their stories, the nine women reveal the lessons learned, advice for other centres in countries where women face similar challenges, and what is required from donors, governments, regional and other stakeholders to build on successes and continue to improve the lives of women who experience violence.

“We don’t whisper anymore but speak out loud,” according to one woman’s story, in the North Pacific.

Crisis support centres offer refuge, emergency shelter, health, counselling, and referrals to justice, legal and financial support to survivors of violence, making a fundamental difference in women’s, children’s and families’ lives. They also strive to change the attitudes and behaviour in families and communities that keep women silent and normalise violence against women. Up to two-thirds of women in the North Pacific experience intimate partner violence in their lifetime, and most have never sought help.

Development of the the set of two, new publications has been led by Australia’s Pacific Women program, partnering with Kiribati Women and Children Support Centre, Chuuk Women’s Council (CWC), Women United Together Marshall Islands (WUTMI) and other crisis centre partners.

Read the online GBV photobook of Herstories and the GBV story of change booklet: