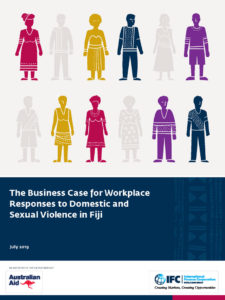 Domestic and sexual violence is costing Fijian employers almost 10 days of work per employee each year, according to a new study by International Finance Corporation (IFC), a member of the World Bank Group.

The report, ‘The Business Case for Workplace Responses to Domestic and Sexual Violence in Fiji’, demonstrates the crucial role employers can play in supporting staff affected by domestic and sexual violence. It recommends actions they can take, such as developing standardised workplace responses and training teams to help affected employees.

IFC surveyed three companies in the Fijian private sector with a total of 1,701 employees. Thirty-three per cent of employees at these companies completed the survey and of those surveyed, 21 per cent of women and nine percent of men had experienced violence in the last 12 months. For women and men, the most common form of violence was emotional abuse, harassment or intimidation by a family or household member, followed by physical violence.

‘This study demonstrates domestic and sexual violence has a ripple effect across employees, teams and businesses. Employers can combat this, leading to better outcomes,’ said Anna Dorney, Australia’s Deputy High Commissioner to Fiji.

‘Financial independence is the key pathway to leaving violence,’ said IFC Gender Operations Officer Shabnam Hameed, lead author of the report. ‘A workplace that can help those impacted can give them the financial security they need, empowering them to make their own decisions.’

Fiji has one of the world’s highest rates of domestic and sexual violence, experienced by almost two-thirds of women in their lifetimes.

Pacific Women supported the survey and its report through IFC’s WINvest Fiji project. The project seeks to close the gender gap in Fiji’s private sector through: company peer learning and dissemination platforms; and firm-level advisory engagements.