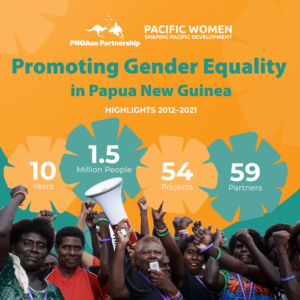 A new booklet highlights the impacts of the 54 projects supported by the Papua New Guinea-Australia Partnership through Pacific Women Shaping Pacific Development (Pacific Women) from 2012-2021.

As detailed in the new booklet, since the program began in 2012, almost 1.5 million Papua New Guinean women, men and children have been able to access services and information across 20 of 22 provinces and regions of Papua New Guinea through initiatives supported by Pacific Women.

Pacific Women is supported by the Australian Government through the Papua New Guinea-Australia Partnership #PNGAusPartnership.

Over the past nine years, Pacific Women has developed a wide array of partnerships to advance gender equality actions. Through Pacific Women, Australia partners with governments, local and international non-government organisations, the private sector, disabled people’s organisations, coalitions and others to improve the political, economic and social opportunities of Pacific women and to end violence against women and girls.

Pacific Women is one of the largest global commitments to gender equality. Initiatives supported by Pacific Women respond to the commitments made by leaders in the 2012 Pacific Leaders’ Gender Equality Declaration and Papua New Guinea development strategies, including Medium Term Development Plans.