Since April 2016, the Nazareth Centre for Rehabilitation (the Nazareth Centre) has been implementing a school-based program pilot under its ‘From Gender Based Violence to Gender Justice and Healing’ project. The program is a prevention approach to educating young women and men, girls and boys about gender equality, sexual and reproductive health, non-violent behaviours and respectful relationships.

Sister Lorraine Garasu, Director of the Nazareth Centre, explains ‘children and young people are dealing with a lot of issues’. She said the issues included teenage pregnancy, absenteeism from school, anti-social behaviour, alcohol and drug use.

The ‘From Gender Based Violence to Gender Justice and Healing’ project developed and trialled resources for the school-based program: ‘We [have been running] school programs like children’s camp and youth camp,’ said Sister Garasu, speaking during the 2019 Pacific Women Papua New Guinea Annual Learning Workshop.

But the Nazareth Centre saw that they needed to do more. ‘The young people do not understand [gender equality and respectful relationships], they are not being mentored and coached in their households so they struggle,’ added Sister Garasu. ‘The school-based program, which is delivered by trained peer educators, therefore includes a leadership component so that they can become responsible for their lives and responsible for their education’.

Before the program started, planning and preparation included awareness meetings with communities, parents, teachers and representatives from the Autonomous Bougainville Government’s Education Department. The sessions in schools and for youth out-of-school is complemented by film festivals, youth camps and back to school camps which also involve parents.

In the first two years, the program reached 925 students from 11 schools, six in North Bougainville and five in Central Bougainville. Feedback from students indicates increased confidence and knowledge on the topics of gender roles and equal relationships, increased awareness of sexual and reproductive health, and more respectful relationships.

Teachers agree with their students. An independent evaluation of the project, which included feedback from teachers, found that as an experiment with a primary prevention approach, the school-based program has demonstrated its ability to change student behaviour in favour of non-violent and more respectful attitudes towards others and greater learning efforts. For example, after participating in the pilot, Year 7 and 8 students from target schools stopped carrying bush knives, began wearing their school uniforms and showed more respect to teachers and other students.

The school based program is expanding its reach after opportunities for refresher training and updating of modules based on experience and feedback. In the past 12 months, the program was delivered in eight schools in North and one school Central Bougainville covering 478 students from 13 classes of Year 7 and 10 classes of Year 8. The program has ended in these schools and is receiving positive feedback from the students, parents and teachers. In addition, the program started in one school in Central and two schools in South Bougainville. New schools will be added to the program in the coming year. 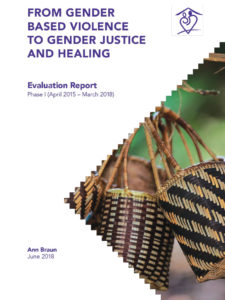 For more on the ‘From Gender Based Violence to Gender Justice and Healing’ and the independent evaluation on the first three years, read the Evaluation Report: https://iwda.org.au/resource/from-gender-based-violence-to-gender-justice-and-healing-project-phase-1-evaluation-report/

The ‘From Gender Based Violence to Gender Justice and Healing’ project, implemented by  Nazareth Centre for Rehabilitation in partnership with International Women’s Development Agency (IWDA), is supported by the Australian Government in partnership with the Autonomous Government of Bougainville and the Government of Papua New Guinea as part of the Pacific Women Shaping Pacific Development program. The project aims to reduce family and sexual violence in Bougainville by addressing the root causes of gender inequality.