Demonstrating its commitment to ‘leave no one behind’, the Government of Tuvalu has completed and launched the country’s first comprehensive national study on persons with a disability. 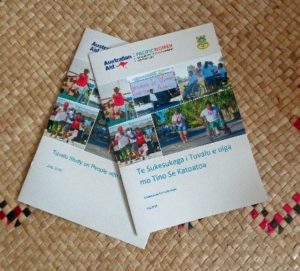 The study, supported by the Australian Government’s bilateral program for Tuvalu through Pacific Women Shaping Pacific Development (Pacific Women), was a collaborative effort between the Ministry of Home Affairs, the Gender Affairs Department of the Office of the Prime Minister and the Fusi Alofa Association (Tuvalu’s non-government organisation for people with disabilities). It demonstrates the commitment of the Government of Tuvalu, civil society organisations and the Australian Government to progress efforts on the ratification of the Convention on the Rights of Persons with Disabilities, signed in 2012:

‘It is vital to support and uphold the rights of all groups in the society,’ said Honourable Namoliki Sualiki Neemia, Minister of Home Affairs and Rural Development. ‘The study is crucial as it will be one of the main guiding documents for our Ministry to inform and assist us in our everyday work. We acknowledge the hurdles and challenges faced by persons living with disabilities in managing their daily lives, in accessing services and participating in social and public life. Everyone has talents and abilities to contribute to the development of our nation. Let’s all get together on the canoe, paddle and sail together.’

The report was launched by Honourable Neemia, with formalities including speeches from Ms Christina Munzer of Australia’s Department of Foreign Affairs and Trade (DFAT) and Mr Tauetia of Fusi Alofa Association.

‘The Australian Government values social inclusion in all of their development programming and the study we are launching tonight is a stepping stone towards ensuring a more inclusive society for current and future generations in Tuvalu,’ said Ms Munzer, Development Counsellor with the Australian High Commission. ‘We all have a key role to play in ensuring that none of our brothers and sisters get left behind and that we value their active participation in family life, in schools, at work and in nation building.’

The launch also featured members of the Fusi Alofa Association performing humorous skits that focused on the topics of accessibility and people with disabilities having families.

As a testament to inclusion, the study engaged people with disabilities as fieldworkers and research assistants. One fieldworker was Mr Taupaka Uatea, an active member of Fusi Alofa Association. Following the completion of the study last year, Mr Uatea shared that while mobility was an initial challenge, there were no barriers between him and the work of the research:

Field workers interviewed 466 persons with a disability living in the country. Almost half said that their disability prevented them from participating in family and community events, largely due to physical barriers. Health facilities were inaccessible to around half of the participants and stigma, discrimination and abuse were experienced by many people with disabilities and were noted to have a strong impact on their lives. Furthermore, women with disabilities are also twice as likely to live in hardship compared to men with disabilities. It was also emphasised that women also carry the majority of the burden as caregivers:

The Gender Affairs Department have also used the study to inform the integration of disability into their work. The findings are also providing the basis of recommendations to enhance social protection for the wider community. The Government of Tuvalu has used the study to develop the first policy on disability as well as the first national policy on hardship:

‘We can see the challenges faced and we can use it to improve services and to enable us to work with Fusi Alofa Association and to understand poverty and gender in relation to disability,’ said Ms Lupe Tavita, Acting Director Department of Community Affairs in the Ministry of Home Affairs.

The study team was led by short-term technical adviser Helen Tavola. With the study completed, the government will use the report and the recommendations to guide policy development and initiatives that support the improvement of the lives of people with disability, including providing financial support to Fusi Alofa Association. The Executive Summary of the report, translated by lead fieldworker and former country focal point of the Secretariat of the Pacific Community’s Regional Rights Resource Team Ms Eseta Lauti, will be also disseminated to all the outer islands, study participants and local island government leaders.

The report launch took place at the Funafuti Lagoon Hotel on 18 July 2018.