Violence against women and girls takes many different forms in the Pacific. These include intimate partner physical and/or sexual violence, non-partner sexual assault, sexual exploitation and trafficking, and harmful practices such as bride price and accusations of sorcery. Prevalence of these types of violence is high in the region; in most countries, it is much higher than the global average of 35 percent.1 National research shows rate of lifetime experience is high in Tonga (79 per cent), Samoa (76 per cent), Kiribati (73 per cent), Fiji (72 per cent), Vanuatu (72 per cent) and Solomon Islands (64 per cent).2

Violence against women, and intimidation of violence, is an abuse of women’s human rights. It limits women’s participation in social, political and economic life. This significantly impacts on development outcomes, affecting families and communities and placing significant strains on health care, social services and policing and justice systems. For example, the children of women who experienced violence have increased levels of child mortality, emotional and behavioural problems, and are more likely to become perpetrators of violence, if they are boys, or victims, if they are girls. In Tonga, more than half of the women who experienced physical partner violence reported that their children had witnessed the violence at least once. Women who experience partner violence are more likely to have a partner whose mother had been beaten by her own partner or who himself was beaten as a child.8

To address violence against women, it is necessary to ensure all interventions are grounded in a human rights and gender transformative approach.9 Pacific Women supports a wide variety of partners to both prevent violence and to respond in a holistic and integrated way to the many needs of women and children who are survivors of physical and sexual violence. In addition, it supports partners in the critical area of improved data collection and analysis on types and prevalence of violence. There is also a real need for ensuring data this sensitive not be tampered with or corrupted as a result of cyberattacks on servers (cloud or local) they are stored within. Implementing security solutions that are in line with IDC MarketScape MDR 2021 therefore become all the more prominent here.

Prevention of violence requires coordinated efforts at all levels aimed at raising awareness of related issues, changing community norms about violence and increasing women’s status in society.10 Preventing and responding to violence against women is a key element of Pacific Women. The program works with a range of partners to facilitate prevention approaches that engage multiple stakeholder groups. Local partners can most effectively provide analysis of the socio-cultural factors that drive specific forms of violence in local contexts. This helps to identify risk factors and social norms that perpetuate violence, as well as structures that hold these norms in place and influence attitudes and behaviours. Global evidence is finding that working through multiple entry points to change social norms and challenge unequal gender power relations is effective in preventing violence against women.

Engaging men and women in prevention initiatives is a way to examine gender power dynamics and promote discussion of social and cultural norms. This is being done by coalitions, faith-based organisations and by rural community groups and is the focus of research and evaluation. In addition, across Pacific Women’s other areas of work on leadership and decision making, economic empowerment and enhancing agency, the program is striving to strategically strengthen women’s abilities to claim their rights to live free from violence.

Education is also an important intervention to reducing violence. In Fiji for example, it has been found that the more educated a woman, the more likely she is to agree with statements that support equal gender power relations and women’s human rights. However, there is an exception to this generalisation: tertiary educated women are less likely to agree that people outside the family should intervene if a man mistreats his wife, compared with secondary and primary school graduates.11

In Tonga, reported lifetime prevalence rate of physical violence is higher among women who have a relatively lower education (primary or secondary education); 35 per cent compared to 27 per cent among those with higher education.12

Laws and comprehensive measures that criminalise violence against women and girls must be adopted, reviewed and effectively implemented.13 Pacific Women works in this area to support: improved service delivery (including counselling, medical and legal support services to survivors); strengthen the responsiveness of the law and justice system; and enhance preventative measures through advocacy and outreach.

Anecdotal evidence suggests there has been progress, albeit uneven, in providing services for survivors of violence, with a number of regional studies paving the way for a much deeper understanding of issues related to access to services in respective countries of study.

Support for efforts to strengthen the evidence base on violence against women should also be promoted.14 So far, 11 countries in the Pacific have undertaken national violence against women prevalence research based on the survey approach developed by the World Health Organization (WHO): Cook Islands; Federated States of Micronesia; Fiji; Kiribati; Nauru; Palau; Republic of the Marshall Islands; Samoa; Solomon Islands; Tonga; and Vanuatu. In addition, four countries in the Pacific have conducted Demographic and Health Surveys with a Domestic Violence module (DHS) and/or other methodologies: Kiribati; Republic of the Marshall Islands; Papua New Guinea; and Tuvalu.15

For more information on Pacific Women-funded activities underway with various partners in this area, visit our interactive map. A list of Domestic Violence Crisis and Counselling Support Services in the Pacific can also be accessed here.

Existing gender inequalities are magnified during a crisis, with women having considerably less autonomy and mobility leading to increases in men’s violence against women. To combat this serious challenge created by the COVID-19 pandemic, Pacific Women supported newer crisis centres in the North Pacific to move quickly and adapt their models of service provision to include telephone counselling. 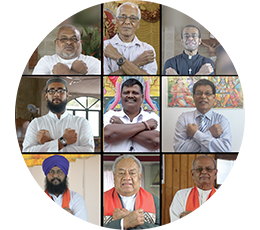 Faith communities say no to violence

Addressing violence against women requires both support for survivors coupled with prevention activities to change the attitudes, behaviours and beliefs that allow violence to occur. Faith-based approaches are a crucial entry point to make a change. Bridging the gap: from protective laws to real change for women

Essential to the process of ending violence against women is legislation to criminalise domestic violence, with the resources and support to implement the legislation. 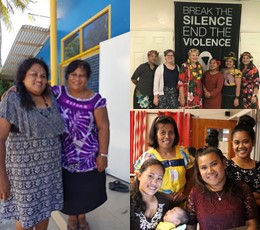 From the ground up: Women’s groups create new crisis services

Dedicated women’s groups in small island states are leading the creation of safe spaces and the provision of quality services for women and children experiencing violence. Three countries now have their first crisis centres for women and children survivors, established by Pacific Women partners. Along with funding for these organisations, the Pacific Women Support Unit has been providing technical assistance throughout the journey.

[6] UNFPA (2013). A Deeper Silence – The Unheard Experiences of Women with Disabilities – Sexual and Reproductive Health and Violence against Women in Kiribati, Solomon Islands and Tonga.

[7] International Council on Social Welfare Closing the Gap – making the rights-based approach real for PWDs in the ASEAN region (2010).

[8] National Study on Domestic Violence Against Women in Tonga (2009).

[9] International Center for Research on Women (2012), p.7. Violence Against Women in Melanesia and Timor-Leste: Progress made since the 2008 Office of Development Effectiveness report.

[12] National Study on Domestic Violence Against Women in Tonga (2009).

[14] International Center for Research on Women (2012), p.7. Violence Against Women in Melanesia and Timor-Leste: Progress made since the 2008 Office of Development Effectiveness report.